The Day the Stars Danced 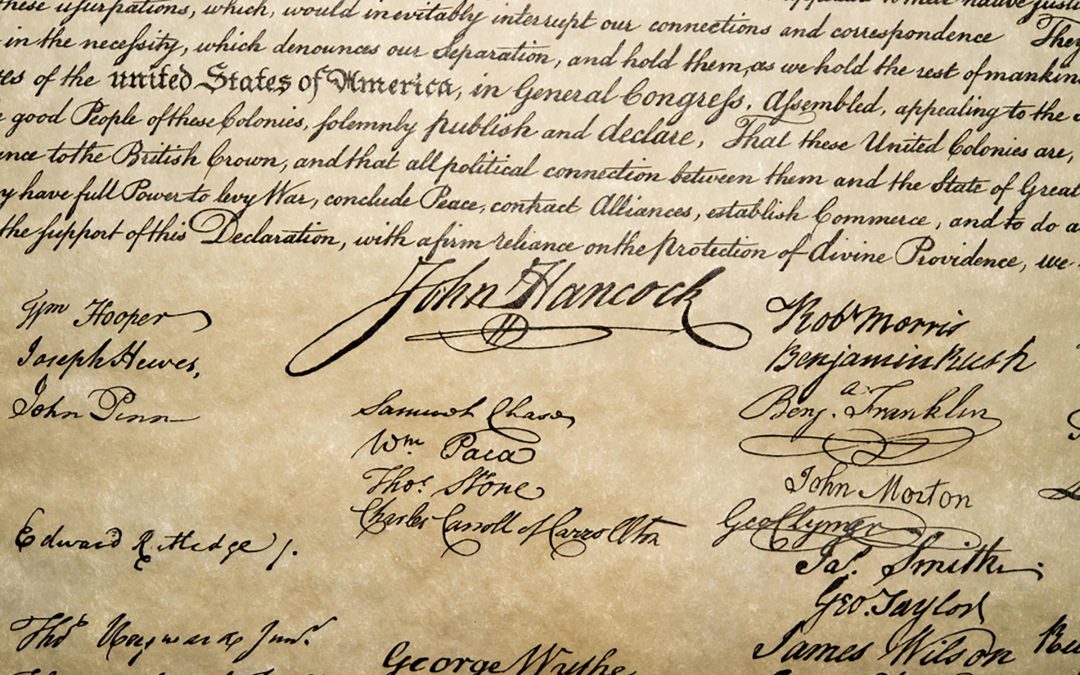 “When America was created the stars must have danced in the sky.”
Bernard DeNoto, Historian

From where I stood, he seemed to be an ordinary fellow. He must have done this a thousand times before for other visitors to the National Archives, I thought, yet the passion in his voice was fresh and new as he read from the original document before us—

“When in the course of human events…We hold these truths to be self-evident, that all men are created equal, that they are endowed by their Creator with certain unalienable rights, that among these are Life, Liberty and the pursuit of Happiness…”

“We, therefore, the Representatives of the United States of America, appealing to the Supreme Judge of the world…do…solemnly publish and declare, That these United Colonies are, and of Right ought to be Free and Independent States;…”

And as the curator concluded this memorable moment for us, his expression seemed to claim the words he finished with, as if they were his own—

“And for support of this Declaration, with a firm reliance on the protection of Divine Providence, we mutually pledge to each other our Lives, our Fortunes and our sacred Honor.”

I will never forget the moment, of many memorable moments, from that pilgrimage to our Nation’s capital, introducing our son, then a teenager, to some of the history of our Nation. As we listened to the curator proudly explaining and pointing out some of the notable things about the Declaration of Independence—which was encased in a secure vault within our National Archives along-side the Constitution of the United States of America—chills and tears flooded my emotions. It was clear that what was before me was not just any document, but a legacy of ideals and determination lived by those who embraced the Divinely inspired vision upon which this great Country was established.

Before me was a document representing the lifeblood of valiant and decent patriots. One, whose fingerprint—darkening through the ages—could be seen on that document permanently etched there as he leaned over that document to pen his name, knowing that by signing that great document he was putting his life on the line and that he stood to lose all that he had, including his wife and his children. But for the sake of all that he believed in and all that he held dear—especially his wife and children—he signed it.

And on this week in our journey as citizens of the United States of America, I wonder if we are up to the same sacrifice of those fifty-six signers of the Declaration of Independence. Farmers, planters, merchants, lawyers, doctors, who when they signed that noble document knew full well that if they were captured by the British it would mean the death penalty. But they still signed it, because they had a dream for the future of this Nation, and because—no matter what you may hear to the contrary in some circles today—they had a deep faith in God. I wonder if you’ve ever thought about what happened to them. I wonder if you realize the price they had to pay to establish this sweet land of liberty for you and for me.

Five of the signers were captured by the British as traitors, imprisoned and tortured. Twenty had their homes ransacked and burned. Nine of the fifty-six fought and died from the wounds or the hardships of the War for Independence. One, a shipper and planter, saw his ships swept from the sea by the British navy, he sold his home to pay his debts and died bankrupt. One was so hounded by the British that he was forced to move his family constantly and keep hiding. His possessions were taken from him and he was reduced to poverty. British soldiers looted the property of several others of the signers.

At the battle of Yorktown, Thomas Nelson, Jr., seeing that the British General Cornwallis had taken over the Nelson home as his headquarters, quietly ordered his troops to open fire—the home was destroyed and Nelson died bankrupt. Another, Francis Lewis, saw his wife jailed by the British and she died from the hardships of that prison within a few months. Another was driven from his wife’s bedside as she was dying, their thirteen children fled for their lives, his fields were destroyed, and for more than a year he lived in forest and cave, returning home after the war to find his wife dead and his children forever vanished.

These were not wild ruffians. These were men of means, educated men, but men who loved liberty more than they valued their own lives. They paid the price for us. They paid the price beginning at Bunker Hill, and Lexington, and Concord, and down through Valley Forge. These men—who with burlap wrapped around their feet, and their muskets held under their tattered garments to keep them dry from the winter—they paid the price for us. And that’s what the day which we celebrate this week is about; to remember them and the vision of America they set before us. They made the first payment, and that payment has been kept up-to-date throughout our history.

And the duty for the future has been laid at our doorstep to keep those payments current.

Will it be worth the sacrifice? Those who have gone before have answered that question with their lives. Their answer was—Yes!

I am confident that we will do the same, knowing that the future of our Nation and the civilized world depends on that payment being kept-up-to-date.

And as we celebrate the 4th of July this week—the stars still dance in the sky, as God still blesses America.