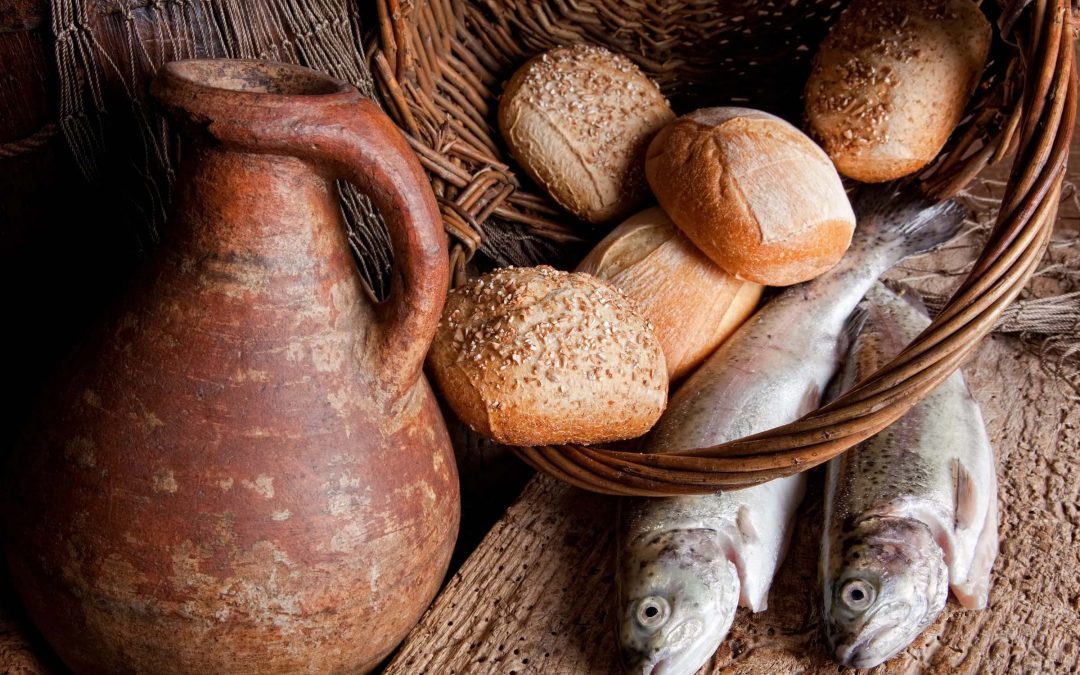 “But Jesus said, ‘That isn’t necessary—you feed them.’ ‘But we have only five loaves of bread and two fish!’ they answered. ‘Bring them here,’ he said…Jesus took the five loaves and two fish, looked up toward heaven, and blessed them.
Then, breaking the loaves into pieces, he gave the bread to the disciples, who distributed it to the people. They all ate as much as they wanted, and afterward, the disciples picked up twelve baskets of leftovers. About 5,000 men were fed that day, in addition to all the women and children!”
Matthew 14: 16-21 (NIV)

The Gospel of John adds that the five loaves and two fish were provided to the disciples by a little boy.

It was a common food of the day for the poor. Often rather small in size, the loaves probably closer to bun-size, and the fish, small dried fish.

And there into the evening the large hungry crowd remained, having witnessed Jesus healing the sick.

Rather than sending the crowd off to find food themselves, as the disciples had suggested, Jesus had a different, more compassionate idea.

He usually does. For you and me, too.

Especially when He knows we’re hungry and tired. Feeling empty. Lost. Carrying memories of mistakes we can’t get beyond.

Maybe having trouble remembering and getting back to who we were created to be.

Standing there seeking fulfillment, needing forgiveness and grace, and redirection for the next steps of your life.

While the God of miracles is standing before us.

The God of miracles who can and will help.

The God who can take five loaves and two fish from the hands of a little boy and feed thousands.

That’s where those people were.

That’s where we are.

And that’s where He is.

Right there before us—to help us live the life reaching our full God-given potential and purpose.

The God of miracles. The God of five plus two equaling thousands fed, with twelve baskets of leftovers.

That’s who is standing before you and me. Always.

What’s going on in your life?

What’s hitting you full in the face, and holding you back from becoming all He created you to be?

Give it to the God of miracles.

Give it to the God of five plus two.

Then be ready with all He will do with your life.