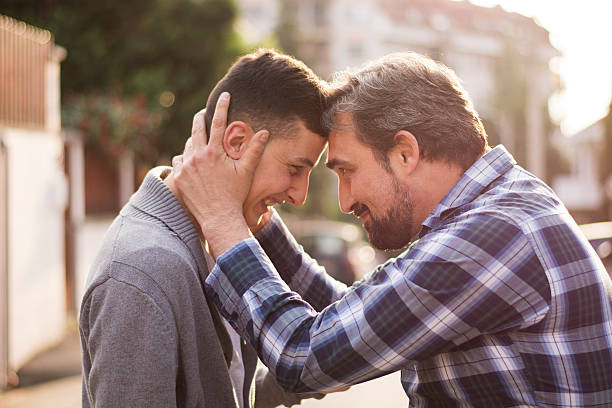 Jesus continued: “There was a man who had two sons. The younger one said to his father, ‘Father, give me my share of the estate.’ So he divided the property between them… [and] the younger son…set off for a distant country and there squandered his wealth in wild living…and he began to be in need. So he went and hired himself out to a citizen of that country, who sent him to his fields to feed pigs. He longed to fill his stomach with the pods that the pigs were eating…

When he came to his senses, he said, ‘How many of my father’s hired men have food to spare, and here I am starving to death! I will set out and go back to my father and say…‘Father, I have sinned against heaven and against you. I am no longer worthy to be called your son; make me like one of your hired men.’

And he arose and came to his father. But while he was still a long way off, his father saw him and felt compassion, and ran and embraced him and kissed him.”

The scripture above is a big message in a short story. I suspect that Jesus was smiling as He told it—even though the story didn’t seem to have much to smile about for a while—just knowing the punch line that was coming.

You have to admit that Christ really had a way with making a point when He shared one of His poignant moral-message stories, or parables. The objective for the listener, or reader, was and still is—to get the point and do something with it.

You can tell from the scenes and the responses, that He was a master at painting a message with His tone, expression and the words. And making points which would last longer than that younger son’s squandered inheritance we saw in the parable above.

And the lesson He shared in this particular parable is a one that God wove throughout the Old and New Testaments—from Genesis 1:1 to Revelation 22:21. Simply and clearly, a poignant reminder of God’s continual presence in our lives and His never-ending love for us—no matter what pigpens we find ourselves wallowing in.

But maybe, in some way, there are some of us who can identify with him.

And if you can’t identify, then either you’re breathing rarified air, or you’re too proud to admit that you’ve been in the pigpen. The truth is that we’ve all felt the pain and sting from mistakes, bad decisions, as well as the roadblocks, detours, ruts and fallen trees we find along the roadways of our lives. We’ve all been in the pigpens.

And here’s what we need to feel next. We need to feel what that younger son felt when his father restored him to all the fullness of life. The message of that story and the message woven throughout God’s Word to us is that no matter what and through whatever it was, and will be—God has never been gone (and never will be gone). He was there, in the pigpens, with mud all over his sandals, waiting for us to “come to our senses” and turn back to Him, or maybe turn to Him for the very first time.

He was sitting right there on the edge of the pig-feeding trough dangling his feet in the slop, waiting. We may not like that image of Christ with his feet in that mess, but that’s who He was then, and who He is now. Waiting for us to turn, so He could help us turn toward all that He had created us to be. Waiting to help us turn toward more than that moment we were in the midst of, and to more than we had yet experienced in our lives.

He was there all the while waiting to love us unconditionally, and lift us out of the pigpens in which we found ourselves, and into all the potential He has placed in our lives.

And it begins, my friends, when we turn.

When we come to our senses—and turn to Him.

So He then can lovingly turn us toward more than we ever thought we could be—and toward all that He created us to be.